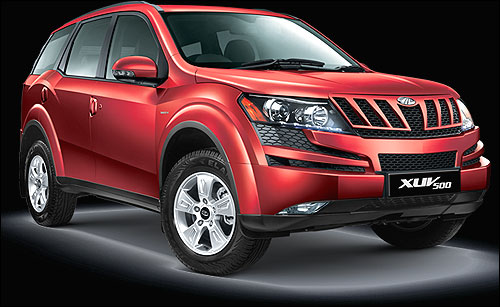 Bruce Lee, Russell Crowe in The Gladiator, Spiderman, a waterfall, combat helicopters and the cheetah are unlikely to ever be on the same storyboard, not even in a comic book.
Yet, they were all contenders for becoming the inspiration behind the Mahindra XUV 500.
A committee that comprised Mahindra & Mahindra President (automotive and farm sector) Pawan Goenka, Chief Executive (automotive division) Rajesh Jejurikar, chief executive (technology, product development and sourcing) Rajan Wadhera, chief executive (international operations) Pravin Shah and senior vice-president (marketing) Vivek Nayar was formed to select one of these that best symbolised power that you can feel. 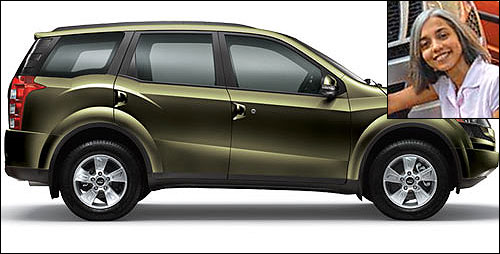 
The men, sometime in early 2007, finally settled for the cheetah.The decision was conveyed to the style team led by Ramkripa Ananthan.Ananthan is one of the few women automobile stylists around. She has studied industrial design at the Indian Institute of Technology Bombay, and has worked for Mahindra & Mahindra for 14 years - she was a part of the team that did the interiors of the Scorpio. 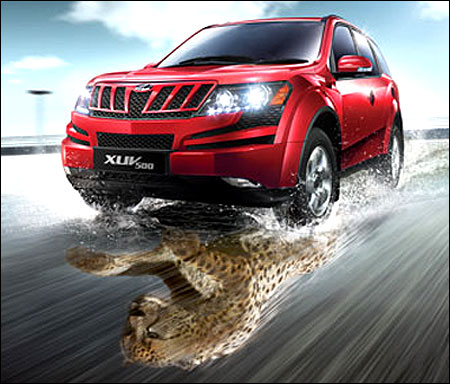 Her job was to style the new sports utility vehicle or SUV around a  cheetah - in the grille, fenders, lights et cetera. Her first sketches were ready by mid-2007.Over the next four years, these went through several reiterations; the final result was the XUV 500 which Goenka calls the first all-Indian global SUV. "Developing a new product is not for the fainthearted," says he.

The idea of a new SUV was born sometime in 2006, when Mahindra & Mahindra decided to go global.The Scorpio was doing well in India but was hardly the product for evolved markets abroad. It did sell overseas, not as an SUV but as a pickup.However, nobody knew where to begin.Ananthan remembers the Paris Auto Show of that year - she went to the stalls of other car makers like Isuzu and Kia to meet customers and get a sense of what they wanted in an SUV.

Then, Mahindra & Mahindra did a "needs and wants" survey of 1,500 customers the world over: Italy, Spain, South Africa, Australia and, of course, India. The learning was that customers wanted aggressive style and power. It was decided to capture this in the cheetah.A 100-day study to flesh out the product suggested that it should have a monocoque structure (instead of mounting the body on the chassis, here the two are integrated) for better handling, power of 140-150 horsepower and high fuel efficiency.

The project was then handed over to a team to make a business case: the costs, the possible volumes and revenue, and the return on investment. The report took three to four months to prepare, and was approved by the company's capex committee. Goenka refuses to divulge the return on investment projected by this team, but says it covers the cost of money - debt at 12-13 per cent and equity at a higher cost.

Ananthan and her team designed the new SUV all by themselves, the interiors as well as exteriors. They moved from sketches on paper to computers and finally to full-scale clay models. These clay models were shown to a group of teenagers, perhaps because they would become potential customers by the time the SUV was ready, and a group of "prosumers" - people like fashion designers and writers who can visualise trends that will emerge four or five years later - for feedback. "We have to live in the future," says Wadhera.

Right through, full secrecy was maintained. Even top Mahindra officers could not enter the design lab with camera cellphones - they had to deposit them outside. Prototypes were taken out on the road under camouflage and there were no badges on the grille or back. Some enthusiasts took pictures of these hooded machines and sent them to Business Standard Motoring.

With some informed guesswork, the Business Standard Motoring team was able to tell it was the new Mahindra SUV. In April this year, Nripjit Singh "Noni" Chawla, the former chief executive of Max Healthcare and now a reader, photographer and traveller, was invited by Mahindra & Mahindra to see the car. Chawla is an old enthusiast of Mahindra vehicles, hence the invitation.

He and some others were taken to a secret location where the SUV was kept in an enclosure."They allowed us to start the car but we couldn't drive it. They wanted my feedback," says Chawla.The same month, Mahindra & Mahindra decided to show the SUV to its dealers at the Westin in Pune (it is being manufactured at Chakan close by).

The SUV was taken in a container to the hotel; though there were over 150 guests, not a single photo or sketch leaked to the world outside.The next month, it was driven in containers to Goa for the sales and marketing teams of the company to see it. Again, nothing came out.

Goenka claims this is the first four-wheeler to be styled totally within India.In the Mahindra & Mahindra stables, the XUV 500 certainly is.The Armada, out of which grew the Bolero, was done in Japan, the Scorpio in the United Kingdom and the Xylo in Italy. For the Xylo, Mahindra & Mahindra vice-chairman & managing director Anand Mahindra had travelled with the design team to Italy; in the new SUV too, he closely monitored the style.

It was important, says Ananthan, to ensure that the new SUV belongs to the Mahindra family.It would thus have to include some design elements of the Scorpio. The real challenge was the rear seat: the Scorpio and the Xylo have adequate space in the third row to seat three people of good height; this gave the SUVs a box-like feel from behind. Contemporary design has moved to a sloping curve towards the rear. After much debate, it was decided to sacrifice the third-row's height advantage to get that curve.

By now, Mahindra & Mahindra had also decided that the new SUV would not be a replacement for the Scorpio but a whole new premium product. Jejurikar says this helped contain costs because it was originally meant to be in the same price band as the Scorpio (below Rs 10 lakh). The target for the price was set at 15 per cent to 20 per cent below SUVs made by multinational car-makers. The final price was Rs 10.8 lakh for the base model.

Srinivas Krishnan, the editor of Business Standard Motoring, says this is below the expected price tag of Rs 14 lakh (Rs 1.4 million).Is it strategic pricing? Jejurikar say it isn't; the company is making money at this price.

Also, a higher price would have left a segment open between the Scorpio and it, which rivals like the new Tata Safari could have moved into."The price of Rs 11 lakh (Rs 1.1 million) to Rs 12 lakh (Rs 1.2 million) is the tipping point where a buyer of a C-segment car like the Honda City may upgrade to an SUV; a higher price becomes forbidding," Jejurikar adds.

For the premium positioning, Wadhera and his team offered to pack in features that come in an SUV of Rs 22 lakh (Rs 2.2 million) to Rs 24 lakh (Rs 2.4 million). Wadhera lists 48 new features in the SUV that will "win the customer's wow".His team has applied for 31 patents on the SUV. 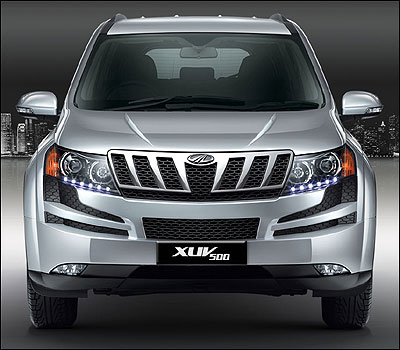 Almost 40 per cent of the SUV's cost is the electrical and electronic systems.Goenka says the harshness of the noise and vibration gave him several anxious moments, as did the fit and finish of the interiors."Till about a month before the launch, we weren't sure if we were there," says he.

The mHawk engine of the Scorpio was tweaked to improve the output from 120 horsepower to 140 horsepower and the fuel efficiency to 15.1 km to a litre. All told, Mahindra & Mahindra has spent Rs 850 crore (Rs 8.5 billion) on the project, which includes Rs 200 crore (Rs 2 billion) on the upgrade of the engine and the transmission.

Is the product perfect? Krishnan, who test-drove the XUV 500, says the gearbox is notchy and not very precise.During the test drive, the steering began to vibrate when the speedometer crossed 110 km per hour.

Once the prototype was ready, it was put through three juries more than once: one was drawn from the development team, another from the other verticals of the company and the third from outside the company.Chawla, it is safe to assume, belonged to the third jury.

At the same time, 250 prototypes were driven 2.35 million km over two years in New Zealand, Austria, South Korea, Dubai (to check the effectiveness of the air-conditioner in extremely hot conditions), Sweden (for extremely cold conditions), China (it could be a market in the future), South Africa, the US and, of course, India.

In India, it was driven at Khardung La, the highest road in the world, and was tested for spin, turn and brakes on the tracks of the Mahindra Research Valley near Chennai. For almost two years, 125 people tasked to validate the prototypes lived in hotels, away from their families, and drove their machines day and night.

Instead of giving it a name like Bolero, Scorpio or Xylo, Goenka and his team decided to go with the alpha-numeric XUV 500. (Internally, they call it the Five O-O because O at the end of the name has proved lucky for the company in the past; double O could be doubly lucky, says Jejurikar).

It also gives the company the flexibility to build a family of SUVs around the name: a smaller variant can be called the XUV 400 and a larger variant the XUV 600. Also, the Mahindra name that was relegated to the background when the Scorpio was launched because it was a fuddy-duddy farm-sector brand at that time, has been given a pride of place this time round - the SUV is called the Mahindra XUV 500.

In the pre-launch social media campaign, Mahindra & Mahindra tried to create excitement about the product but didn't talk about its features and create expectations. Clearly, the Nano experience was playing on everybody's mind, where the focus had shifted to the features from the overall car experience. The television campaign that accompanied the launch had to be discontinued because of the huge bookings, says Jejurikar. 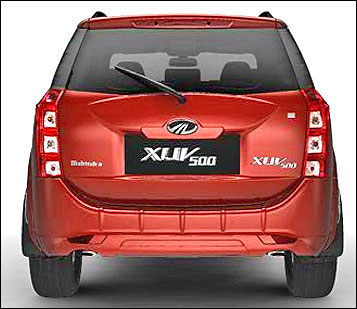 At the moment, Mahindra & Mahindra dealers are not taking fresh orders.The production lines in Chakan are fully booked till mid-January. Though almost 300 Mahindra & Mahindra employees have opted for the XUV 500 under the company car scheme, it has been decided to limit their quota to 25 a month.

Recently, 150-odd people from the Mahindra Research Valley were called to a Chennai hotel to celebrate the success of the XUV 500. Is some cash incentive likely to follow? "It's not yet decided," says Jejurikar, "though there was some small amount given out when the Xylo was launched." Till it's decided, the technicians will have to keep their fingers crossed.
Posted by Unknown at Wednesday, August 07, 2013

Email ThisBlogThis!Share to TwitterShare to FacebookShare to Pinterest
Labels: Articles